Become an armchair expatriate with these 55 video series that'll take you out of the U.S. & around the world!

My wife and I have spent nearly every evening for the past decade or so as armchair expatriates, leaving America behind and spending hours in other parts of the English-speaking world. We travel by video streaming services to cities, villages and rural areas of the United Kingdom, Ireland, Scotland, Australia, New Zealand, India, Canada and pretty much anywhere that English speaking folks have established themselves. We leave behind the bulletproof vests, serial killers, SWAT teams, predator-driven, high-intensity thrillers and cheesy "reality" shows that make up a typical evening of American television.

We have this test question for any new TV series: "Would we want to have dinner with these characters?" If so, we watch a few episodes and ask another question: "Do I feel better after spending time in this series?" As long as we can answer both of these questions in the affirmative, we keep watching the series. But if the episodes start going dark, nasty or generally emulating the "edgy" dreck served up by most American media we instantly drop them and move on.
Looking back over our nightly travels "abroad," we see that the series we spend the most time with share many of these qualities:
• There are no commercials or ads breaking up the flow (at least there are none after each episode begins).
• The characters are generally good people with reasonably good intentions.
• The characters are pursuing laudable goals and encountering plausible obstacles that they eventually overcome.
• There is little or no violence or gore.
• There is beautiful scenery.
• Our characters are not constantly battling a life-threatening evil or slogging through a dark, dystopian world.
• When the series is over we feel better, rather than worse, at having spent time with these characters. In particular, we don't feel ashamed or voyeuristic at having been sucked into something that was mostly negative or merely sensationalistic.

Below is a list of 55 fictional series we have seen and recommend, categorized by the part of the world to which they will take you. The majority of these are from two low-cost sources: Acorn TV ($5.99/month) and PBS Passport ($5/month). A few are from Hulu and Netflix.
[Dec 6, '22 Update: We're currently exploring & enjoying Britbox (from BBC & ITV). So far we can recommend these full original series set in England: Cold Feet, As Time Goes By and All Creatures Great & Small (1978 version, 90 episodes!). But you'll find many more contemporary series from BBC and ITV there as well.]
Because these series occasionally move from one service to another, the surest place to learn more about them is to check their permanent IMDB (Internet Movie Database) listing. So I've tried to link each to that info. Each listing also notes where we watched this series: Acorn TV,  PBS, Hulu or Netflix. However, it's possible that by the time you search for them they may be on another service. Listings in bold are our particular favorites, some of which we binged entirely, twice!
Viewing Tip: While the characters of all of these series speak English, the local accents can be thick and sometimes includes unfamiliar regional slang expressions. So we frequently run captions and stop as needed & ask Google for confusing slang translations based on slang dictionaries for different regions. This way we learn the same kinds of interesting stuff we might learn if we were visiting the area in person.

Escape to the Country: A British Reality Show Bonus

We discovered Escape to the Country on our local digital broadcast channel 2-3, a sub-channel of CBS-2 Los Angeles. Every day from 4-7 pm Pacific time it broadcasts re-runs of this BBC property search show which helps prospective buyers find country homes all over the UK, Ireland, Scotland, etc. Each one-hour show includes a tour of a regional highlight (village, brewery, factory, historical estate, farm, garden, etc.) along with walk-through tours of three for-sale properties which our prospective buyers discuss with the host. It's an interesting and fun escape as we learn about the buyers' hopes and dreams and see how well they match with what the local homes and culture might provide. 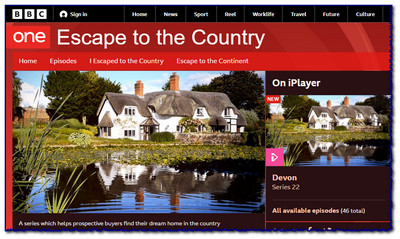 You could watch it on demand on Britbox ($6.99/mo) or see if for free, like we do, on the Dabl network among your local broadcast stations. If you can't find it locally, Pluto TV streams all Dabl shows live, for free. Check the Pluto schedule for a time that might suit you.

Your PBS Passport is a unique value when you consider the hundreds of shows, beautifully photographed and artfully produced, that are represented by just these three sample collections below.  Being able to stream series like these, on demand, provides thousands of hours of high quality globetrotting entertainment. While I certainly haven't seen everything in these massive collections, I can vouch for their consistent quality.  And these three series are just the tip of the PBS streaming iceberg! Visit your local PBS station's webpage to find your own hidden gems.

As the extensive list above clearly demonstrates, you have plenty of alternatives to the fictional choices offered up by American media. What's more, you can sample almost all of them or free with trial subscriptions to the various services listed. So join us... become armchair expats and travel the world while enjoying the company, and experiencing the sometimes unusual customs and traditions, of far-flung English-speakers from all over the world!