White folks: It's time to go beyond "not a racist" & become actively anti-racist.

1) The sickening video of police officer Derek Chauvin slowly crushing the life out of a handcuffed George Floyd by kneeling on his neck. I've seen that look before on the face of a hunter crouching over a mortally wounded deer, waiting patiently for it to die. But how could this be happening to a human?

2) The relentless determination of a local Black Lives Matter activist named Janee (pronounced "Jahnay"). Day after day, week after week, despite having two jobs, she makes time to show up on a busy local street corner, sometimes with her comrades, sometimes all alone. She holds a sign that says simply, "Be anti-racist." Drivers passing by honk their horns in support. At first "be anti-racist" seemed to me a rather understated admonition. But as I would come to learn, it is meant to emphasize action, rather than merely holding good thoughts.

Passing Janee on this street corner every day on my cardio walk, I shared brief conversations with her. I encouraged her activism and expressed my support in spirit, which she welcomed. Then one day she suggested I check out the book: "White Fragility..." I Googled it and began watching YouTube videos with the author and others explaining the concept. At first I found it to be abstract and difficult to relate to. And I told myself this surely didn't apply to me. But eventually something shifted and I absorbed this powerful truth: For white folks, simply being "not racist" is next to useless... In fact, it can be an impediment to true racial justice. What really matters is that we "be anti-racist." The former ("not racist") is a benign state of being. The latter ("be anti-racist") is all about taking action -- changing the status quo that has allowed America's white supremacy to manifest in subtle, and not so subtle, forms for over 400 years.

But talk is cheap. Words are easy. At this important moment in our history I want to share some specific, observable actions we can all take to help change this. The 4-step "To-Do" list below is inspired by my journey along Janee's suggested path to "be anti-racist." I know I'll be doubling back and repeating some of these as I try to grow into a new consciousness. In the meantime, I hope they help inspire you to start on your own path to "be anti-racist."


A. Watch George Floyd's murder video over and over until you can see it with your heart. Watch it until you feel like screaming this question: "How the hell can this be happening to him and so many other black people?"  Video timeline: How George Floyd's death unfolded

B. Wake up to the murder and abuse of women of color, such as Breonna Taylor, who must face the dual horrors of racial discrimination and misogyny. Video: The Urgency of Intersectionality   (Note: Don't miss the powerful conclusion of this video.)

C. Wake up to the revolution (and opportunity!) that's upon us: BBC's Four numbers that explain impact of George Floyd


A. Check out this tight summary of 400 years that make up the "Timeline of Events That Led to the 2020 'Fed Up'-rising." It's a quick chronology of the ways that white Americans have worked overtime for centuries to assure white dominance throughout our society. Trust me. You'll find some amazing (and outrageous!) surprises in here: 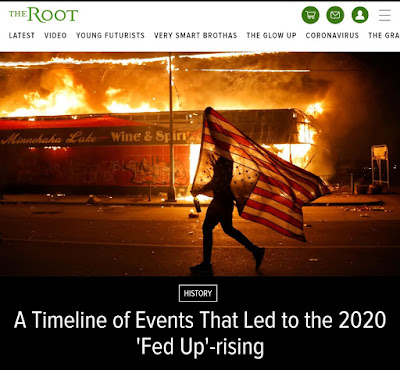 C. Watch this six-minute video and see why white people (especially those of us who are "not racist" white people) and our "white fragility" are a huge part of the problem:

D. Learn that as a white person (even a progressive) you are a fish who can't see the racist water in which you're swimming, though it is central to your very existence. White sociologist Robin DiAngelo explains:

"I believe that white progressives cause the most daily damage to people of color. I define a white progressive as any white person who thinks he or she is not racist, or is less racist, or in the 'choir,' or already 'gets it.' White progressives can be the most difficult for people of color because, to the degree that we think we have arrived, we will put our energy into making sure that others see us as having arrived. None of our energy will go into what we need to be doing for the rest of our lives: engaging in ongoing self-awareness, continuing education, relationship building, and actual anti-racist practice. White progressives do indeed uphold and perpetrate racism, but our defensiveness and certitude make it virtually impossible to explain to us how we do so."

Check out Robin DiAngelo's book, White Fragility: Why It's So Hard for White People to Talk About Racism and her extensive collection of free videos here.

Here's the bottom line: The question isn't "Am I racist?" Of course none of us will answer that question with a "Yes." Instead, we need to be asking ourselves these questions:

Step 3: Wade into the discomfort and become less "fragile."

Here's a 3-part approach for connecting meaningfully with people of color, as outlined in the video Seeing White Fragility with my annotations.

First: Listen. (Really... Shut up and listen with your heart.)

Next: Understand. (Again... Turn off your inner voices that are justifying & explaining & engage their words & comprehend what you're being told.)

Finally: Amplify what they are trying to tell you. Why amplify? Because as part of the dominant culture, we white folks have a helluva big megaphone when we finally decide to use it on behalf of people of color. So... Push your ego out of the way and shine a light on their message and amplify it!

As you work to become less "fragile," consider these "dos & don'ts" from the video Seeing White Fragility:
1. Don't assume you're an objective authority on the experiences of people of color.
2. Don't get defensive. What you consider to be a divisive or abusive point of view [coming from them] is likely a sign you have more to learn.
3. Don't recenter racial conversations around you or your feelings. [It's not about your feelings, fragile white person!] Instead, listen and learn and then amplify what people of color are trying to tell you.
4. Explore the complexity of the lives of the people of color you don't understand or disagree with.
5. Do consider the root cause or need behind a person of color's emotional outburst or complaint. That energy may be the best way they are able to explain it at the moment.

"Our starting point as white people is to be safer, included and 'seen' by default. Which is why asking people of color to shoulder the burden of fighting for equality, requiring them to be friendly and helpful in the face of white ignorance and expecting them to give white people the benefit of the doubt is not only wrong, but makes well-meaning white people complicit in their oppression. Choosing not to be sensitive in a world that already shelters you will improve your racial resiliency, lead to better relationships with your black and brown friends and neighbors, and most importantly create necessary space for the equality and justice that people of color deserve." -- video Seeing White Fragility

Step 4: Become an active, practicing "anti-racist" and stop claiming you're "not racist."

Make your own Anti-racist To Do List using these examples of specific action items as thought starters:


It's time for us white people to rise up and get off of our comfortable, "I'm not a racist..." recliner and become active, aggressive anti-racists. For more than four centuries our active institutional and social distortions in favor of our white supremacy have created a living hell for many people of color. We whites have built this mess. We whites have to take responsibility for helping people of color take it apart and rebuild it with a more just and equitable world.