From Political Hobbyist to Political Activist: Why and How to Make the Shift 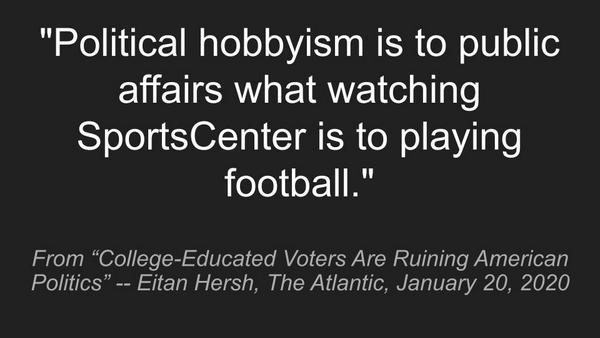 My Shift from Political Hobbyism to Activism

January 21, 2017 was transformative for me. It was on that day that I went from political hobbyist to political activist. On that day (the day after Donald Trump's inauguration) I joined an overwhelmingly female multitude of my fellow citizens who simply couldn't believe that Trump had become president. Representing my wife and daughter and granddaughters I attended the first Women's March in downtown Los Angeles, resolved to do everything I could to resist Trump's presidency. I went alone, not as part of any group. I had no idea what I was going to do to actualize my desire for resistance. I just knew I had to do something.
Luckily, I bumped into (literally!) a smart young couple who invited me to join their local Indivisible group. Within a few weeks I had a meaningful assignment on the team, began attending regular organizing meetings and was taking my first baby steps as a political activist. In the years to come I would attend advocacy meetings with politicians and elected officials, participate in more marches and demonstrations, help with get-out-the-vote campaigns, etc.
As we would soon see in the 2018 midterm elections, many of those born-again-as-activist women who attended that first Women's March would run for office and win political positions. And a vast army of us would continue pushing an anti-Trump, pro-democracy progressive agenda at all levels of government -- local, state and national.
Soon, to my surprise, my noisy political rants on Facebook and Twitter dwindled down to almost nothing. They just weren't that much fun anymore. As my energy shifted to real, meaningful political action, my need to bluster and debate had all but disappeared. And better yet, I began to see a direct connection between my tangible work as a budding activist and actual, real-world political progress.

The Problem with Political Hobbyism

I know from personal experience as a political hobbyist that it can be addictive to follow the cable talking heads, dig into opinion pieces, quote the pundits and wax profound via memes and social media link-posting. I get it! I've been there and I know it can feel good to raise hell online -- especially if you are raising hell alongside a core group of like-minded ranters (a.k.a. an "echo chamber") who have targeted and do regular combat with opposing ranters from "the other side." But eventually you have to ask yourself: What is this accomplishing? Am I making a difference or just letting off steam? Or worse... Is this just about getting attention and proving how profound I am? And, finally, if I have the energy to do this stuff, then why not channel it into concrete action that has a chance of getting meaningful results?
American political scientist Eitan Hersh is the author of Politics Is for Power: How to Move Beyond Political Hobbyism, Take Action, and Make Real Change. In his podcast interview with Hersch, Chris Hayes (of MSNBC fame) asks him to explain "what he diagnoses as 'political hobbyism,' what real political engagement looks like, and .. how this self-gratifying online hobbyism can be detrimental to the real political activism needed to create change." Check it out.

Okay.  So if political hobbyism is the problem, what's the solution?

The solution: Channel that rant energy into political activism!

You might be surprised how easy it is to become politically active! In fact, most of us who helped get nation-wide results in the 2020 election were able to work from home, on our own schedules (mostly part-time) with not much more coordination than occasional phone calls and Zoom meetings. The work itself usually consisted of simple stuff like phone banking, text banking, calls to voters to help them figure out how to get registered, etc. And yes, from time to time, we made calls to our local or national elected officials as part of one initiative or another. The bottom line: All of this was much more fun and rewarding than merely ranting on social media.
Action, in a democracy, means making phone calls to the office of your elected officials, hitting the streets (masked, these days, of course!) to take part in a political action or demonstration, joining a group of volunteers (in person or virtually) who are working for change or (Do you dare?) running for local office.
In her article "How to get involved in an activist organization and become a valuable volunteer — starting today," Laura Casado elaborates on these action items for the newbie activist:
And, though it may be a bit dated (2017), you might want to check out CNN's link-filled "25 ways to be politically active (whether you lean left or right)."
And then, there's Indivisible, the umbrella organization of grass roots teams that got me started on my road to political activism.  According to this quick WikiPedia summary:

"Indivisible is a progressive movement in the United States initiated in 2016 as a reaction to the election of Donald Trump as President of the United States. The movement began with the online publication of a handbook written by Congressional staffers with suggestions for peacefully but effectively resisting the move to the right..." 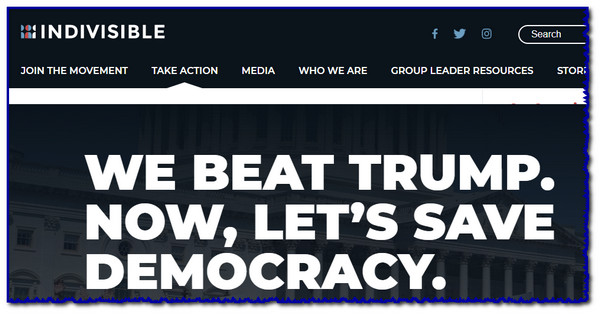 Not ready to join an activist group? Okay, then. If you prefer individual activism, a good way to start is to simply pay attention to what your elected representatives are preparing to vote on. You gotta track the bills that are scheduled to be voted on, then make some noise and let them know how you want them to vote! On the national level, GovTrack.us is a great tool for this.

Specifically, GovTrack.us tracks the United States Congress and helps Americans participate in their national legislature. From their website:

"We publish the status of federal legislation, information about your representative and senators in Congress including voting records, and original research on legislation. We’re one of the oldest government transparency websites in the world."

GovTrack databases and search tools can help you find out who your representatives are, how to contact them, their current and historical congressional activity as well as provide automatic updates on Congress. Then it's up to you to let them know what you want!
And if you already have an issue that is urgent for you and you’re burning to call your senator or congressperson immediately, use the links below to get their contact numbers and go get ’em!
Finally, you can always take the leap and Run for Something yourself!

Check out these encouraging words from the Run for Something website:

"Throw everything you know about politics out the window. You’re qualified to run for local office – we’re here to help... Since launching in January 2017, Run for Something has recruited 70,000+ young people across all 50 states who want to run for local office... We provide a safety net for new and exciting progressive candidates — at all stages of their journey — to help them run efficient, grassroots & voter-contact driven campaigns and not feel alone in the process."

So just do it!

As you can see from the resources above, there are plenty of ways you can channel all that political energy of yours away from pointless political hobbyism and move it into meaningful, change-the-world political activism.  As anthropologist Margaret Mead famously said:

"Never doubt that a small group of thoughtful, committed citizens can change the world; indeed, it’s the only thing that ever has."

So... if you think the world sucks, why not stop complaining and do something to fix it?

Bonuses: Need a little pep talk to nudge you to action? Check out these articles & podcasts:
at February 25, 2021