Do What You Fear and Grow Stronger (an audio podcast) 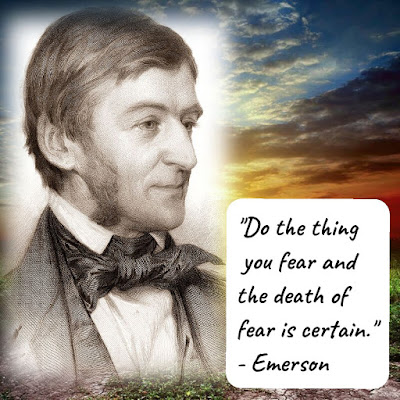 (Use the control bar below to download or play the podcast. Or scroll down and simply read the transcript. Enjoy!)

Transcript of this audio, originally published on March 22, 2009:

Do one thing every day that scares you.” - Eleanor Roosevelt

When I was 15 years old, I loved to sing. I sang mostly in the shower, really belting out the lyrics to rock and roll songs. The bigger the shower, the better the echo, and the louder I sang. One night after basketball practice, I was alone in the school's shower and really wailing. As I finished my shower and my song, I grabbed my towel and turned to leave and saw one of the seniors standing there smiling at me. I knew this guy. Everybody knew this guy. He was the lead guitar player in a popular local band. And he informed me that he really liked my voice and wanted to know if I'd consider singing with his band. Consider?! Well I jumped at the chance. Nervous, but enthusiastic, I attended a few rehearsals at his house and discovered that I really loved singing amplified and surrounded by all that rock & roll thunder. Eventually, during one of those rehearsals, it dawned on me. This was the real deal! Someday soon I'd have to do this in front of a crowd! If I stopped to think about this for long, my heart would start racing and I'd feel like running away and hiding. But I loved the music and I kept on rehearsing and pushed those thoughts out of my mind.

Inevitably, a couple of weeks passed and I found myself walking on stage in front of my first big crowd. I had sweaty, cold palms and I was terrified. My heart was in my throat and I could feel all the lyrics just leaving my brain entirely. And again, I felt like running and hiding! But, ready or not, the band started playing, people started dancing, and I somehow started singing on cue and the energy of it all just began to flow. For the next several years my singing skills grew, I learned to play bass guitar, the band played a wide variety of venues where we met all sorts of people, and I became completely comfortable in front of crowds. Whole new worlds were opened up to me... and I wasn't even out of high school!

As the years pass and I face even more frightening challenges, I realize that I've come to regard fear as a doorway. You can't really see everything that's on the other side, but if you ignore your sweaty palms, gather your courage and step through, you almost always enter another dimension in your life. A dimension in which you are stronger than you were in the one you left behind.

Consider these 5 Truths about fear from Dr. Susan Jeffers in her powerful book, Feel the Fear and Do It Anyway -- Dynamic Techniques for Turning Fear, Indecision, and Anger into Power, Action, and Love:

These are powerful ideas! Dr. Jeffers recommends that you copy these 5 Truths, post them, and read them once a day for the next month. The object of the game: Change your relationship with fear. See those situations that you fear as they really are -- as opportunities to stretch and grow stronger.

Okay. Let's accept the premise that these 5 Truths can help change our overall attitude toward fear in general. But what about that huge, specific fear you are facing right now. When you're staring at a major, painful fear... one that almost paralyzes you... how can you rally your will to overcome it? Where do you begin?

According to Dr. Jeffers: "Remember that much of the trick of moving from pain to power is taking action. ACTION IS VERY POWERFUL!" In other words, even if you just take a baby step or two... you need to act. You need to stretch a little outside your comfort zone, experience a small success, overcome a little piece of your fear, and build on that. Then repeat the process by taking the next step and the next step and the next step until you have completely overcome that major fear. So, to return to my singing example, it was really important that I spent time rehearsing with the band (something that was a little scary, at first) before I stepped out on that first stage. And it also helped that that first small crowd was made up of sympathetic friends and relatives who welcomed the band. That helped me overcome some of the stage fright I'd feel when we later performed in front of a huge crowd of strangers. So I took baby steps! Little by little, I chipped away at that larger fear by confronting it a piece at a time.

But what does all this mean to project teams... and project managers? Let's consider a typical example of something that strikes fear into the hearts of many project teams: The need to ask for more resources. Especially in these tough financial times, with organizations running lean and resources hard to find, it can be frightening to tell your customer or sponsor that you simply don't have enough people (or equipment, or money) to get the job done. The idea of going to them and saying, "We need more resources" can be truly frightening, especially when you begin imagining the angry response this news might provoke. So how can you deal with this fear? Given this situation, you need to take some baby steps that allow you to address the fear in small increments. So you might begin by doing some research... poking around and documenting the time it typically takes other project teams to perform the tasks your project team is trying to complete. Then you might document how your customer or sponsor has added features and deliverables to the project that is going to result in overtime for some of your project team members. Next, you might organize your findings into a presentation for your customer or sponsor. Then you might rehearse the meeting where you present your case for more resources with another manager playing the role of your sponsor or customer. By gathering data, organizing your thoughts, rehearsing your meeting, you are taking baby steps that help you get comfortable with your fear a little at a time. And you are growing stronger at each step. Finally, you develop enough strength to step through that door and deliver your message. Sure, it's still a scary situation and you feel fear! But you have made yourself strong enough to endure the fear and get the job done. In short, you've learned that when you do what you fear, you grow stronger.

In Susan Jeffers words: "Commit yourself to pushing through the fear and becoming more than you are at the present moment. The you that could be is absolutely colossal."

Reflect on these questions: